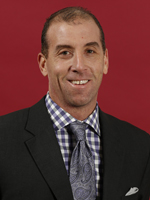 John Fitzgerald starts his fourth season as the Head Baseball Coach for the Maroons in 2017-18.

Fitzgerald has totaled 272 victories in 13 years as a collegiate head coach, including eight seasons with at least 20 wins.

The 2017 Maroons boasted one of the best offenses in NCAA Division III. UChicago's offense hit for a .334 batting average (11th nationally) with a .412 on-base percentage (22nd). Three players were named All-Region. Outfielder Connor Hickey ranked eighth nationally with 1.43 runs per game, and outfielder Maximiliano Larsen was seventh in the nation with 0.50 doubles per game.

In 2015, third baseman Kyle Engel was a First Team All-American and Central Region Position Player of the Year from the ABCA. Engel broke the school records for season doubles (25), season hits (68) and career doubles (50).

He came to Hyde Park after spending the previous seven years at North Central College in Naperville, Ill. The Cardinals won 143 games during his tenure, which made him the third-winningest coach in the 153-year history of the program.

As a collegiate athlete, Fitzgerald was a four-year letterwinner for the UChicago baseball team. He compiled a career pitching record of 12-8, including a 6-2 mark in 1996. He helped the Maroons reach 20 wins in three-consecutive seasons for the first time in school history. Fitzgerald was also President of the Order of the C. He graduated in 1998 with a degree in sociology and was an assistant baseball coach at UChicago in 1999. Fitzgerald went on to receive a master's degree in business administration from Loyola University Chicago.

In 2014, Fitzgerald led North Central to a 27-15 record and the pitching staff recorded the second-lowest ERA in school history (3.33). His 2010 squad went 31-11 and reached the NCAA Division III Baseball Championship for the first time in 12 years. The 31 victories were the second most in school history. The Cardinals went 17-4 in conference games that year to win the College Conference of Illinois & Wisconsin (CCIW) title, and Fitzgerald was named CCIW Coach of the Year.

Prior to his arrival at North Central, Fitzgerald was Head Baseball Coach at Illinois Institute of Technology from 2004-06. The Scarlet Hawks went 26-21 in 2005 to record the second-highest win total in school history. They were also ranked in the National Association of Intercollegiate Athletics (NAIA) top 25 for first time ever. 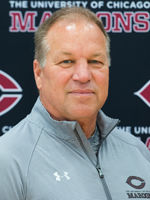 Paul Stevens continues his assistant coach duties on the UChicago baseball coaching staff for his third season in 2017-18. The 2017 Maroons boasted one of the best offenses in NCAA Division III. UChicago's offense hit for a .334 batting average (11th nationally) with a .412 on-base percentage (22nd).

Three players were named All-Region. Outfielder Connor Hickey ranked eighth nationally with 1.43 runs per game, and outfielder Maximiliano Larsen was seventh in the nation with 0.50 doubles per game.

Stevens previously served as Head Baseball Coach at Northwestern University from 1988 until his retirement after the 2015 season. A three-time Big Ten Coach of the Year, he amassed more victories than any other skipper in program history with 674.

Under Stevens' guidance, the Wildcats excelled in the classroom. Since 1985, 215 student-athletes earned Academic All-Big Ten honors, while eight were named CoSIDA Academic All-Americans. He mentored five Big Ten Medal of Honor recipients, including Girardi, Loretta, Ron Rojas, Francis Brooke and Luke Farrell. The Medal of Honor is the conference's oldest and most exclusive award, bestowed to one male and one female student-athlete from the graduating class of each university who had attained the greatest proficiency in athletics and scholastic work.